When I was a little girl, maybe eight or so, my dad gave me a unique deck of Tarot cards.  I think they were actually swag he received at a conference from a paper company, but they are really cool! I remember him saying that he wasn’t sure why, but he felt like I would really like them even though they were pretty weird. Ha! My dad didn’t live to know me as an adult, but he seemed to know me deeply even then.  I do read Tarot, but bought a different deck and kept the 70’s pack safely tucked away, thinking I would frame them.

Flash forward to my Butoh life, many years later. I wanted to do something interactive and very personal for the audience and thought about those cards. I hadn’t opened the box in years. The texture of the paper, the funky 70’s colors and illustrations, the smell…Butoh Tarot was born.  I have performed it four times, twice for Day of the Dead performances at the BeBe Theatre for ACDT, once outdoors at the Vance Monument park for the Asheville Butoh Festival and once at the Odditorium for the Asheville Fringe Arts Festival opening.  Butoh Tarot is interactive. An “audience member” draws a card from the deck and I read the card for them by performing a personal Butoh dance.  It is intense as each dance is for the individual, is very personal and not choreographed, but created on the spot based on my reading of their chosen card.  I love doing this piece (if you can call it that) and hope to expand upon it by “reading” in different venues and creating an installation as well.  The photos are from the Asheville Butoh Festival readings April 2013. 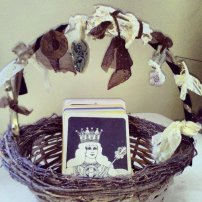 The deck in their special basket I made to house them.

About to read Jim Julien’s card. Photo by Nikoletta Robinson. 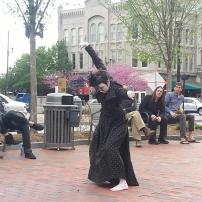